- October 17, 2016
Today's post in my series is a jolly, festive one for Pabst Blue Ribbon Beer from the October 1942 Woman's Home Companion. What's interesting, is that there aren't a ton of Halloween-themed advertisements in these October issues of women's magazines from the '40s. There are a few here and there, and you're lucky if you get an article about Halloween, so I felt I'd struck gold with this one. I hunted down this issue of Woman's Home Companion in particular, because it had an article about throwing a Halloween party, which I'll be posting later in the series as we get closer to the 31st. It's pretty awesome! :-D


Right away, the eye is drawn to that awesome pumpkin cooler. I'm not a beer drinker myself, so I figure any beverage of choice in a bottle could be substituted. I'm a fan of root beer myself! (And when I say fan - let's just say that for one of birthdays in recent years, I had a root beer tasting party where we tried 21 different kinds of root beer. That was a lot of fun, and my father-in-law is just as keen on root beer as me, so it was pretty exciting for us both! haha!)

Here's a close-up of the instructions for the pumpkin cooler, because I just know you want to make one of these! 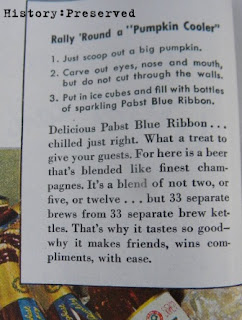 The menu is just as important as the decorations. Interesting variety, wouldn't you say? 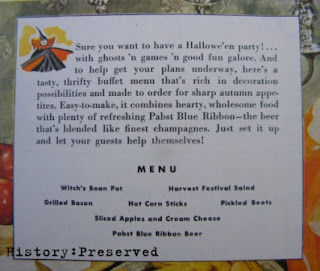 And here are the two recipes they include in the ad - Witch's Bean Pot and Harvest Festival Salad. That salad sounds a bit spicy with the raw onions and the radish! I wouldn't mind trying those beans, though. Yum! 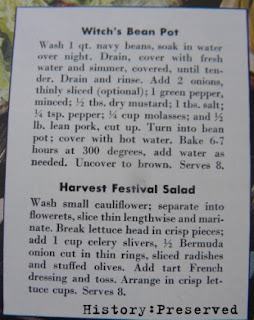