- October 21, 2016
I've only got 10 days left in the series, and I still have a lot of fun things to share! Today, I'm posting about an interesting Jell-O ad from the November 1942 edition of the Ladies Home Journal. It features Kate Smith, a famous singer from that time, who did a lot of food endorsements. I have a breakfast cookbook that features Ms. Smith and Post products like Shredded Wheat and Grape Nuts. 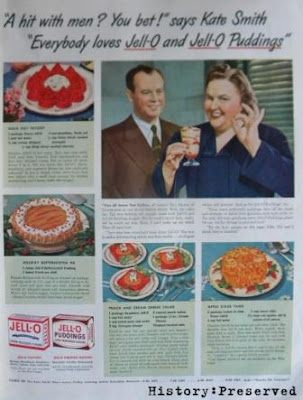 I got a close-up shot so you can read the text, because these ads are just so entertaining to read! 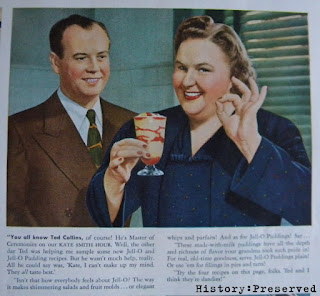 There are quite a few really cool things about this ad, so let's get going!

First, the name for this recipe, Apple Cider Tang, is just fun. Right away it makes me want to eat it. Second, it calls for lemon or cola flavored Jell-O. Yep, you read that right. Cola! The ad states that "Cola is Jell-O's newest flavor - and it has all the snap and tang you love!" Sadly, though, it's not available on the West Coast. haha!

Man, cola flavor. What have we been missing? Seriously, people, the Jell-O company has been holding back on us!

Anyway, I really can't even begin to imagine what cola or lemon mixed with apple cider would taste like, but this Jell-O mold looks promising with only apples in it. I mean, it's a pretty simple recipe and the ingredients don't sound gross like so many of those gelatin molds do from the 1940s. Apple cider in Jell-O actually sounds pretty awesome. Maybe I could use plain gelatin and use cola as the liquid... I think that might work! I really have to try this one. It is just too awesome not to. (And notice it says sweet cider, not hard cider. haha!)

Here's the recipe with a cute picture:

Wait! Hold it! I just did a search on Jell-O flavors and found this blog with a list and cola is on it along with a lot of other interesting ones. But then I went to Jell-O's website and cola is not one of their current flavors. Even Wikipedia says the cola flavor has been discontinued. Oh well! Either I improvise or just stick with boring ol' lemon. I'll get back to you on this!
1940s autumn wartime food magazines rationing recipes WWII