- October 29, 2016
For me, autumn wouldn't be the same without an apple crisp or crumble of some kind. But an Apple-Peanut-Butter-Crumble?! Wow! What an interesting, fun twist! Today's post comes from the November 1942 Ladies Home Journal. Give it a try!

I couldn't fit everything in I wanted to for this series, (just think of all the Thanksgiving stuff I'm neglecting!) so I'm doubling up near the end!

The great thing about these menu cookbooks is that they have menus for a bunch of holidays, including some you wouldn't think needed its own menu like Washington's Birthday or Armistice Day! The Halloween ones are really fun, so here are a few menus from two different cookbooks.

It's really neat that they include a "market order", so shopping is at-a-glance easy.
Isn't that Jack O'Lantern Cocktail fun?? What a great idea! This one comes from the Alice Bradley Menu-Cook-Book.
Both of these come from the Lily Wallace New American Cook Book. The numbers next to the names correspond to the recipe number, so it's an easy matter to turn to that recipe in the cookbook and make it! I love this method of organizing. It's so easy to find exactly the recipe you need. 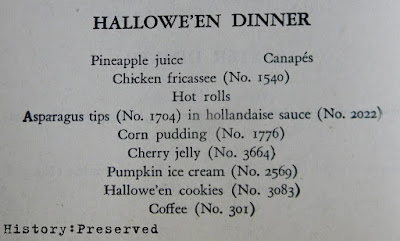 If there's a recipe you really want to know more about from these menus, just let me know, and I'll look it up! My friend Loris, raves about that Shrimp Wiggle, so it's already on my list of things to try. :-)
1940s autumn wartime cookbooks food magazines rationing recipes WWII