Let's take a quick moment to ponder the title of this 1940 recipe from the Kate Smith's Breakfast Book for Quick Bran Cinnamon Rolls.

Is this recipe quick? Meh.


I have had a crazy sweet tooth lately. It might have something to do with having a nursing infant around. Or maybe not! Either way, I've been wanting to bake something else out of my Kate Smith's Breakfast Book and finally settled on this recipe for cinnamon rolls. (I still have a box of Grape Nuts that needs to find its way into more of her recipes. I mean, come on. No one's going to actually eat the cereal as is in this house!)

The recipe consists of making the Bran Biscuits and modifying it into cinnamon rolls. Not a weird concept by any means. The Bran Biscuits call for Whole Bran Shreds. I have no idea what those are, and I don't think you can get them anymore. They don't sound very appetizing. Anyway, to substitute I used Bran Flakes. I love eating bran flakes with raisins. (Not Raisin Bran. Coating raisins in sugar is  just gross and redundant.) When I get to the bottom of the bag, instead of forcing myself to eat the flake dust at the bottom to salvage the few remaining whole flakes, I dump it into a container to save for recipes such as this one. They worked perfectly!

The recipe is really straightforward. Nothing too fancy going on here.

I didn't take a picture of them before being baked. I was in too big of a hurry to eat them already!

And need I say how yummy they were? I say were, because they have gone the way of all things amazingly tasty. My whole family loved them. If you're going to have biscuit cinnamon rolls, you might as well get the bran on and make these! 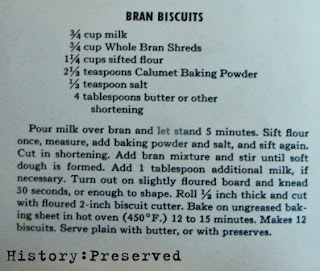 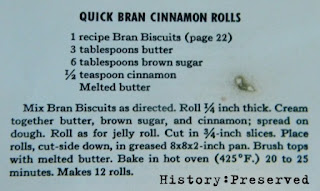 And you can forget about these being "good-for-you" like it says in the picture at the top, because they have twice the butter than regular cinnamon rolls. Ha! The bran just makes you feel better about eating them. Right? 😉