- June 21, 2017
It's been awhile since I've posted about a museum, let alone visited a museum, but for good reason. Our baby is six months old, and I'm finally getting the hang of taking him out for longer times. I'm hoping to make it to some museums soon, but in the mean time I have a museum to share with you that we visited last year but never got to post about.

I took my kids on a field trip to the Daniel Boone Homestead in August last year, 2016.  I have a personal family connection with Daniel Boone. Some of my ancestors on my mom's side traveled with him west to the Kentucky wilds to settle. They stayed there for a few generations before spreading out to Indiana and Illinois. Besides the homestead house, a cabin, and a barn, there is a really neat 18th century vertical water-powered sawmill on the property. From their website it says, "This water-powered, vertical-blade sawmill was built in Oley Township by Daniel Bertolet in the late-18th or early-19th century and was moved to the Daniel Boone Homestead in 1972."

I wanted to show the kids such a cool technology (one of only two in the country, I believe!), so we made a trip especially to see the saw mill on the last day it was running for the summer. It was a really neat experience! We were the only ones there for the demonstration, so we were able to ask questions to our hearts' content.

While we were there, we also took a tour of the beautiful Boone home that had been built onto by several families over time. We arrived in the afternoon with only a couple hours to spare. By the time we got out of the tour, it was close to closing time. When we were heading up to a Pennsylvania-German style cabin, two staff members passed us on the path to close up the cabin. When we caught up with them, they offered to show us the inside of the cabin before they locked it up, which is usually blocked by an iron grate door. You're able to look inside, but not enter. We were happy to take them up on such a unique offer!

On our way back, I had a nice chat with the staff members who turned out to be the Museum Curator and soon to be Museum Director. I explained my education in museum studies and about my history blog, and we had a fascinating discussion about the problems of keeping museums open today. What an insightful day it was all around!

Here is the video from their website that gives a little history of the place, about Daniel Boone and his family, and about the house.

Everything below are photos from our trip. Here is the house. It's a really neat place and the inside rooms are spacious with tall ceilings. The style is Pennsylvania-German which you'll see examples of below. 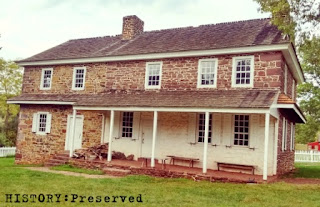 When you walk into the house, you enter straight away into the kitchen hall. The kitchen is at the center of the house with the front and back doors in line with one another. This way the house would be warmed centrally from the chimney and hearth while in the summer, the doors could be opened and a breeze could run straight through! I really love 18th century German architecture. They were really so ingenious! 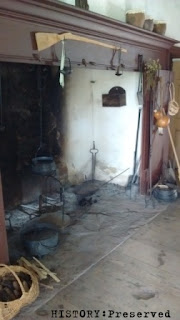 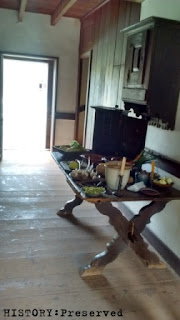 In the side sitting room, I really liked how they framed a peek of what's behind the wall. 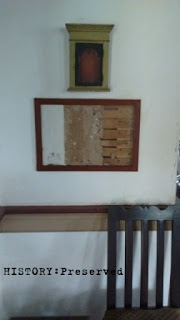 All my pictures upstairs of the house are a little dark. The rooms are pretty basic and are used mostly educationally, so they're not really set up as full bedrooms, though a few of them do have beds.

The next three photos are from the Pennsylvania-German cabin I mentioned before. They don't have lights there, so my pictures are a bit dark.
The picture on the left is of one of the sleeping areas I think? I love that in this house as well, the chimney is at the center and in this room they have an iron stove to heat the other rooms, utilizing the same chimney. Very smart!

The photo on the right shows the similarity with the big house. Front and back doors are aligned with the kitchen table at the center, the hearth to the left out of the shot. I love the brick flooring! You don't see that in cabins all that often. It would make it easy to clean, I imagine. 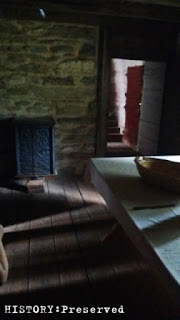 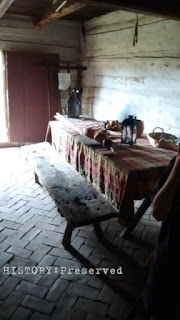 And here is the sawmill! You can see the men talking about the sawmill have my engineering-minded son's rapt attention while my daughter is off playing somewhere by the mill run/creek that feeds the water mill. 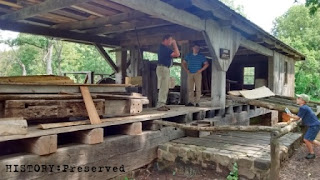 Here's a look at the board they sawed off for our demonstration! I was amazed by how smooth it was. The rough bit at the end is where they have to split it off because of how the vertical saw operates. If you sawed it to the end, it would end up damaging the saw. 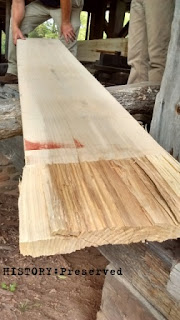 And because I think it is just so cool, here is a video of the saw in operation! My commentary is kind of silly. I couldn't think of the word "wedge!" Ha!

If you ever get the chance to be in the central Pennsylvania area, I'd really recommend visiting this museum dedicated to one of our American forefathers.
18th century museums