- July 08, 2017
It's been ages since I've done an author highlight! I've been thinking about P.G. Wodehouse lately and thought he'd be an excellent candidate. He's slightly more famous than some of the other obscure authors I'll highlight on here, but enough of my friends have said they've never heard of him or Jeeves & Wooster that I felt justified in highlighting this brilliant writer.

I admit that I didn't know much about the British author, Sir Pelham Grenville Wodehouse (pronounced "Woodhouse") or his life. He was born in 1881 in England. Wodehouse's life was quiet in the beginning. After graduating from school, he worked in a bank, which he disliked, so he turned to writing in his spare time. His first book was published in 1902, and he went on to publish many more books and scripts.

Later, during WII, his life became quite tumultuous, where because of some misunderstandings over some comedic radio broadcasts to America (who had yet to enter the war), he was labeled a Nazi-sympathizer and a traitor by the British. Even though he was found clean by MI5, he was never able to return to his native British soil and spent the remainder of his days in the U.S. with his wife where he eventually died in New York in 1975. Before his death, he was pardoned by the British government and given a knighthood. 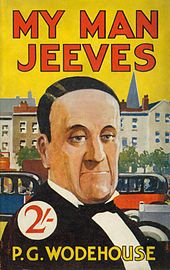 Two of his most famous characters from one of his book series are Bertie Wooster and his valet Jeeves, thanks in part to the 1990 TV show "Jeeves & Wooster", starring Hugh Laurie and Stephen Fry. I am a huge fan of the show and own the whole set on DVD. Yay! One of our chickens is even named after his character Honoria Glossop. Isn't that such a fun, snooty chicken name? (His character names are deliciously hilarious by the way! Stilton Cheesewright, Gussie Fink-Nottle - say it with a lisp and you've got it!, the list goes on and on!) Sadly, I haven't read any of the Jeeves books, so shame on me! I need to read them all.

I've read one of his other books, but for some reason, I can't remember which one I read. It was silly and fun, and I remember laughing readily to the ridiculous shenanigans going on in the story.

I think the most iconic thing about Wodehouse is his use of nonsense language. He really played on Edwardian slang and the dialogue of his characters is quite unique. Sometimes it's hard to follow, but I rather think that's part of the fun and adds to the confusion that are the zaniness of his plots. 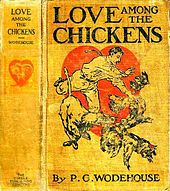 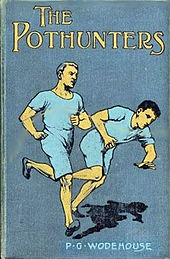 His life had a sad ending, which is a shame considering his work bring so much laughter and lightheartedness to the world. I really recommend you pick up a book by P. G. Wodehouse, and if you ever get a chance to watch Jeeves & Wooster, do it! The likes of such fun and hilarious larks can't be found anywhere else! 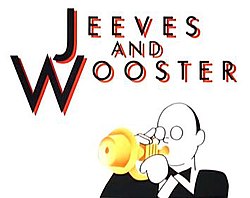 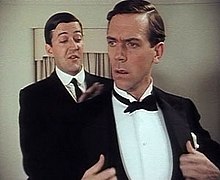 P.S. I found a lot of great information on Wodehouse here at Wikipedia. And there is a great website dedicated to Wodehouse found here.
All the images used come from Wikipedia.
20th century authors books