I've been thinking about museums lately and how they're changing and adapting to "keep up with the times", which is funny if you think about it, because they seek to preserve a past and to connect people to that past. I wanted to share a few blog posts/articles I've been hanging on to that have some great thoughts on historical sites and living history.

First up, my good friend Mairi, over at Magpie Tidings, wrote a fascinating post about the dilemma historical sites face when it has a long history - what time period do they focus on to portray? One of them? All of them? You can read about it here. I like how the museum I used to work for took on this problem - they made a 1836 village, and then on a different part of the property they built an 1886 section and they kept expanding from there. You can "transport" to different years, learning about the area through time. This doesn't completely solve the problem of older sites such as castles, like Mairi talks about, because their timeline is so vast. In some cases, later phases of a site are torn down, but it's arguable that there's much lost when that happens. 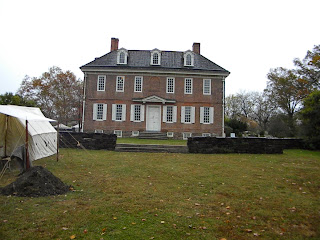 Second, I ran across a really fascinating post on Our Girl History where she talks about a satisfying living history interaction when she was in charge of setting up a market stall and selling produce and drinks to the soldiers working on a redoubt at their fort. (Portraying the year 1777). She discussed how frustrating it can be as a woman in living history connected with military, and that it's hard to feel valued and like you can fully participate. You can read it here.

Her post really spoke to me, because I have felt that same frustration countless times as a Civil War reenactor. WWII reenacting is much more fulfilling to me because the roles of women in the 1940s expanded hugely. There is so  much to study and learn and portray about women during WWII. But for those women who love and portray other times periods, it's always exciting when they find ways to have triumphs and make connections like those she talks about in her article. Women through history are amazing and interesting, normal and steeped in the hum-drum. They all deserve to have the spotlight to remember their contributions to society and history and human kind! 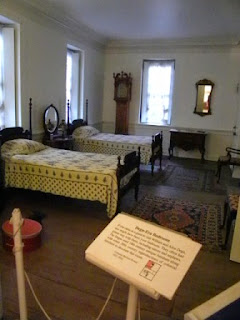 The third article I wanted to share comes from AASLH's blog Views From the Porch. You can read the article here.
It is a really thought-provoking view about how historical houses need to evolve and change to become historical homes in order to better portray to the public that real people lived there with faults, and fights, worries and victories just like we do today.

Usually when I think of an historical home, I think of the roped-off rooms where you're only allowed a cursory peek, fake plastic food in kitchen tableaux of a set table or a meal in preparation (these I'd study the most as a kid and find the most mesmerizing). Most things were dusty, musty smelling, and the remotest things from a home where someone lived as you could get. The connection just wasn't there. As a kid I always felt like something was missing, like someone needed to make it come alive - to live in and love the home again.

I love that this article addresses that. They also feature a museum I've been to - the Lower East Side Tenement Building Museum. The way they have it set up, you really feel like the people just stepped away for a moment. It's amazing and is a museum I have fond memories of visiting.

The article also discusses that these house museums need to start shifting away from "don't touch anything" to "don't touch everything". Working at Conner Prairie, I loved that they were always seeking ways to engage visitors with their other senses, even encouraging people to touch. The act of touching and doing is so completely powerful, it has the ability to move and change people. I know, because I've experienced it for myself and seen it happen to others.

I like this quote from their article:
"The most difficult hurdle may be overcoming the reluctance of historic sites to rethink or abandon traditional approaches. This is understandable. Making changes to bring in an expanded or different public, tell new stories, and connect with modern culture is often a frightening prospect that risks desanctification of a site and alienation of existing audience. For some house museums, the chasm between house and home may be too vast. However, the alternative is a site that enshrines dead people, dead ideas, and dead culture—and a collapsing roof."

I do have to disagree with their last statement, though. I don't think there's anything wrong with dead ideas or dead cultures per se. In fact, for historians, it's unwise to discount "dead" anything. It's important to remember and understand them within their context, but it's foolish to brush them aside completely in favor of "the modern" or "the current" trend. The risk there is arrogance that we always know better than they did "back then". Through arrogance, I think we tend to repeat the same mistakes they made, but just in "the modern and current" flavor.

Okay, I'm backing away from my soap box now! haha! 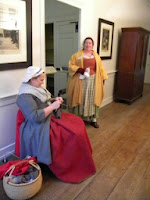 Lastly, I heard on the radio lately about how some museums are incorporating the same technology as Pokemon Go into their museum-scape. Using your phone, you walk around, exploring and discovering and unlocking information and aspects of their museum site. This is a really interesting idea! I think this can be a fun way for museum visitors to connect to a historical site through a medium they're familiar and savvy with. It's something they can do on their own without a dry, boring tour.

But... (did you see that coming? ha!) my fear is that there is the risk that they are so absorbed on their phone that they will miss out on interacting with other visitors at the museum, any interpreters that may be trying to portray things, and they won't connect their other senses. Their faces will be plastered to a screen in public instead of looking out at the world around them. Do people really need another reason to be so self-absorbed?!? So, yeah, I find the idea fascinating and a great example of museums being adaptable, but it's an idea I'm still very wary of. I guess we'll have to see how things go.

P.S. (Updated 7/28/17) I just ran across this article today about a man, Frank Vagnone, who is the new president of the board for Old Salem, North Carolina. He takes an interesting, "anarchist" way of interpreting historical sites and is definitely worth reading about! You can check it out here.
museums