I'm posting later than I wanted, but I actually tried this week's vintage banana recipe for Banana Peanut Butter Mayonnaise! It comes from my cookbook "This Way to the Banana Salad Bazaar", ca. late 1930s-early 1940s.

I bet you've already wrinkled your nose in distaste at the recipe, right? I mean, who in their right mind would eat a weird combination like that?!

Well... I would! I've mentioned before that I grew up eating peanut butter and Miracle Whip sandwiches, so this recipe seemed totally reasonable to me. haha! I really think people today underestimate how flexible mayo is in recipes and this one is no exception.

This recipe is super easy. Mash the bananas, stir in the pb and the mayo. Done! 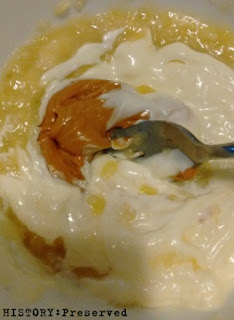 Yes, I agree it turned out to be a weird, unappetizing color. 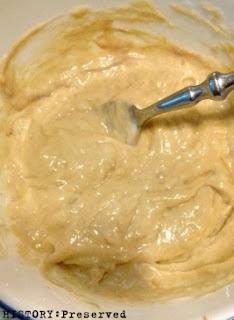 But, in a sandwich it was pretty good! The banana flavor was mostly covered up by the peanut butter, but it did give the spread more body. The peanut butter was made creamy with a slight tang from the mayo. I think this sandwich would need another texture like lettuce, since the spread isn't really thick enough to stay in place. Overall, pretty edible! And just think of the serving of fruit and protein you're getting! 😉 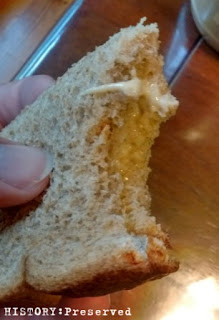 Are you brave enough to give this unique recipe a try? 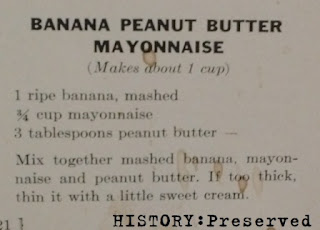