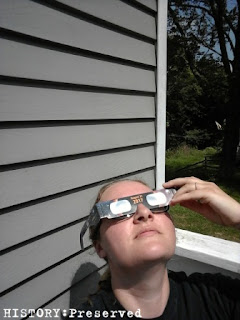 In honor of today's American Solar Eclipse of 2017, I thought I'd look around to see if there were any interesting eclipses around WWII.

Boy, did I strike gold!

Eighty years ago, in 1937, there took place the longest solar eclipse in over 1,200 years. Totality lasted seven minutes! The prime viewing location was a place called Canton Island, a tiny island in the Pacific Ocean between Hawaii and Australia. The United States launched an expedition to photograph the eclipse and so did Britain which sparked a rivalry and led to tensions with Japan right before America's entry into WWII.

To read about the whole event, you can go to National Geographic's article here.

History is so fascinating. Who knew something as global as an eclipse could have such historical ramifications!

Where we are in Maryland, we were able to see around 87% totality. Pretty good! We did the whole experience with watching with our glasses, my son rigging up his camera to safely take pictures of the sun, watching the live stream from NASA as the eclipse crossed the U.S., and partaking of the delicious Eclipse Donuts from Krispy Kreme. Yum! Today was a fun day, and one that will go down in our family's history. 😊