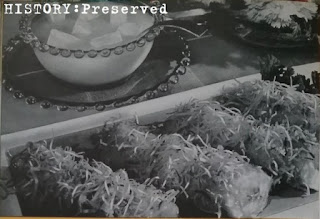 In the second to last week of posting for Vintage Banana Tuesday, I couldn't decide between two recipes, so I decided to include them both! They both come from my copy of the 1941 book Bananas... how to serve them. 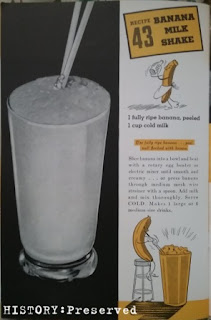 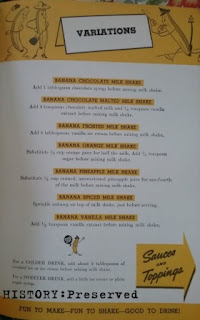 First up is Banana Milk Shake. The regular recipe isn't what we'd call a milkshake today, but I think it's originally where the name came from. It's just literally mashed banana whipped up with cold milk. The fun variations is where the ice cream comes in, which you can see in the next picture. Look at all those yummy banana milkshake variations!

And second, is Banana Coconut Rolls. These are interesting on a whole bunch of levels! The Banana Coconut Rolls sounds quite yummy actually. But then, there are two different sauces to serve on top - Pineapple Sauce or Orange Sauce. The most interesting thing to me, though, is when you look at the picture of the recipe - look how finely shredded that coconut is! For me, as a vintage recipe baker, this is a total game changer. Modern shredded coconut is much wider than this. I don't think I've ever run across such long and finely shredded coconut in the store or anywhere else. (I'm sure there's somewhere online I could order it from...) When you mess with the size of the shred, it totally changes the texture of the food. My 1930s recipe for Coconut Macaroons would have a totally different mouth feel from what I've been making!

Okay. Geek out is now over! haha! 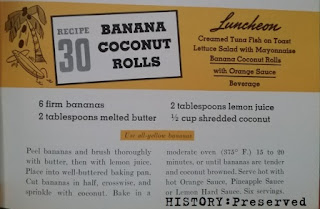 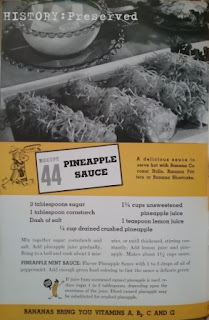 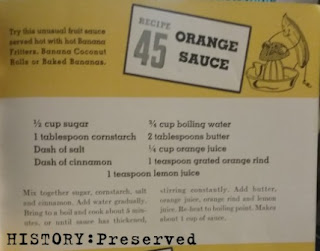 I've mentioned before the funny, cute artwork in this book before, and here are some more examples of it! I just love that this poor, unsuspecting banana below is about to get beaned in the head with some coconuts. Haha! 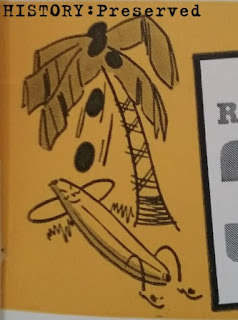 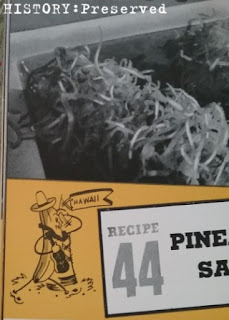 The second banana is on a vacation to Hawaii, ukeulele and all! But this third banana is just downright scary! Is he actually torturing that orange?! It's just that face on the orange! haha! 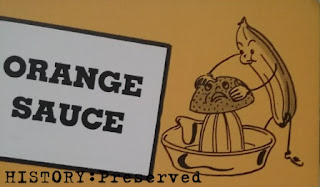 There is so much more fun artwork from this book to share. I might give you a peek in the final week, so stay tuned!
1940s cookbooks food recipes vintagebananatuesdays