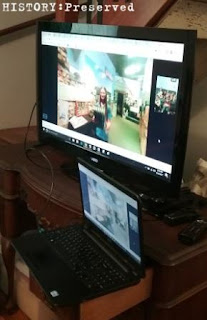 We just started our homeschool year not too long ago, and we had a really great field trip opportunity come to us. We were going to be able to visit a museum in Kansas from the comfort of our living room!

My son is in a 4H Robotics Club and did some research on the DoubleRobot - a Segway combined with an iPad to create a telecommuting robot with all sorts of cool applications. Besides visiting your job or school through this robot, there are some museums that are using these robots for remote visitors!

Unfortunately, there aren't very many museums in the U.S. using this technology, but one who is, is the Kansas Oil Museum. As soon as we found out, my son was jumping at the chance for a tour! They usually have public school groups taking advantage of their robot tour, but they were very willing and open to having a couple homeschool families do the tour.

I got together with a friend and her kids that were interested and tried out the tour just this past week!

To be brief, how it worked is the museum sends us a link via email to connect up with the robot at our tour time, it connected up, turned on the robot, and we were live! The kids sat on the couch so the guide could see them through my laptop camera and in the screen of the iPad.

The tour guide then took us through the museum telling us the history of the town and its place in Kansas history as well as agriculture and the oil boom. To get around the museum, I steered the robot using the arrow keys on my laptop, and was even able to take pictures with the camera on the robot of things we wanted to remember for later.

We, unfortunately, weren't able to finish the tour due to a technological mishap that may have been user inflicted... but all is well, and we'll be going back for the rest of the tour this week!

(I just had to mention - One cool things we learned is that sorghum was first grown in the U.S. in Kansas because other types of crops didn't do well in the Kansas climate. Sorghum came from South Africa where the soil is poor and the rainfall is minimal, just like Kansas. I grew up eating sorghum, which is a thick, sugary syrup much like a cross between honey, maple syrup, and corn syrup. If you haven't heard of it, it's probably because it's more known in the Midwest and Plains states.)


If you know anything about me and museums, you know that I am really interested to see how museums use technology in their spaces - how effective, useful, and educational it is in the end. So, to be honest, while I did set up this robot tour with my son's interests in mind, I was secretly delighted to have a chance to test this cool museum technology myself!

So, a few things: Since the use of the technology is remote, the wear and tear is pretty minimal. Unless you happen to crash the robot... I think that's the highest risk for the robot technology. This risk is far outweighed by the potential for connecting with visitors. There are so many museums I'd love to visit, but distance and location are usually the factor that keeps me from visiting. It's an obvious thing with museums. But with the use of a robot that connects visitors from anywhere in the country or the world, that opens up a huge opportunity for museums!

Case in point - the Kansas Oil Museum isn't a museum I would have thought to visit, and it's not one I had even heard of, but because they had this technology available where we were able to connect with a real person and then move around and "visit" the museum, it opened up my own world to something new and interesting in history.

There are a lot of amazing museum websites out there, but there was something special being able to see and interact with a human being, ask questions in real time, and see the exhibits for ourselves. Plus, who wouldn't want to control a robot from across the country?!

The only downside was the quality of the picture made it impossible to read signs or to see anything very clearly. I feel that's something that will only improve with time.

Overall, I loved this application of technology within a museum. I hope to see it more prevalent at museums in the future!
18th century 19th century 20th century museums