A Woman's Plight: Learning From Frustration

- December 28, 2017
Notice: This post discusses women's menstruation and frustration. If that makes you uncomfortable, please take this as fair warning.

Today was going like every other day, post-holiday. On top of trying to catch up on cleaning, caring for the baby, and feeding everyone lunch, I had to make sure we were out of the door by 2 pm to get the kids to their music lessons. In my bustle to get us out the door on time, one of the kids mentioned that they'd heard someone knocking on the door. It wasn't until a few minutes later, baby in arms, that I opened the door and saw an unfamiliar work truck in our driveway with two men at work on our septic tank. We weren't expecting anyone doing work, so I went out onto the porch in the freezing cold to say hello and ask what they were doing.

One of the two men greeted me and said they were the company contracted to service our new septic tank, and said things didn't look good. He then proceeded to hold up a dirty tampon and said the tank was "chock full of feminine hygiene products" and that they clogged the motor of our ridiculously fancy septic system (which was a requirement by the state for us to put in after our old one died.) He had to come closer to the house so he could hear me speaking to him and grinning, rather smugly I felt, he continued to explain more in detail about how the motor was being screwed up, that only what we eat and naturally comes out can only go down the toilet. Not only that, but now we're going to have to pay $1000 to have the tank pumped and start fresh. His grins were goading in my eyes - it was something that could obviously only be my fault. He exactly didn't say that, but it was essentially what he was getting at.

I hurriedly asked him to leave his card and info at our door and went inside to wrangle the kids into the car so we wouldn't be late. Inside, I was smoldering, and it took the entire 35 minute ride to the music store to process what had just happened.

I was made to feel guilty and humiliated for a crummy, basic, unchangeable fact of my life.

I'm so grateful for a best friend who let me rant to her via text how angry I felt and about how it was obvious that a man designed the stupid septic system, because they couldn't think of a way to accommodate a basic, obvious necessity of women. They really have no clue what it's like to go into a public bathroom with signs in the stalls saying "Don't flush anything but toilet paper", but no trash can is provided, a woman's flow is heavy, and she's supposed to somehow do something with that dripping, bloody tampon!

I'm still spitting mad about it, but I didn't want to just be angry, though. So, like any self-respecting historian, I started thinking about how women have been dealing with these frustrations through history. I remember hearing how Mr. Harry Selfridge of London's Selfridge's & Co. was the first businessman to put public women's toilets in his stores so women wouldn't have to go home if they had to go to the bathroom (bravo!!) and would stay to shop longer.

But, I wanted to know more, so I've been doing research. Most of the articles out there are either super feminist (which isn't me) or a "helpful history" as an introduction for their feminine product. Both are highly skewed and not what I was looking for.

I finally did find this useful little article from The Smithsonian with pictures of historical women's hygiene products from their collections.  The bibliography lists a book by Lara Freidenfelds called The Modern Period: Menstruation in the Twentieth-Century that looks like a really helpful resource. You can get a preview of each of the chapters here. I think I'll put the book on my book goal list for 2018. In the end, though, there's not a lot out there. It's a topic that's been neglected, unfortunately, so I'm glad that some historians are beginning to write about it.

Here's one thing I learned from my research - the first successful tampon marketed was in the 1930s.  Dozens of ads for sanitary napkins and tampons I've found in 1940s women's magazines come to mind as well. They prey on the fear of "being left behind" or "missing out on all the fun" because "it's that time again." They claim their products gave young women their active life back, and considering the lengths women had to go before that, I'd argue that they were right.

It's funny that women's sanitary products haven't changed much since then. Personally, I think that's given men enough time to figure something out regarding septic tanks...  but okay, I'll make some allowances. Even though women have been dealing with these issues pretty much on their own through all of time, I'm not going to expect just men to make some changes. There are plenty of brilliant, problem-solving women that are actively trying to change things now. Technology in the systems that deal with waste is something that needs to improve too.

In the mean time, I have to figure out how to deal with this in my own home and what I'm going to have to teach my daughter when the time comes. I'm going to keep my dignity about something that I really don't have to be ashamed about, no matter what some random guy says. In this strange way, I feel a strong camaraderie with millions of women of old and what they've had to put up with just to get through their monthly cycles while trying to live their life. Without getting on my soapbox, this is one huge reason why History is so important to me. It's grounding. And it keeps us humble by showing us where we come from, and in some cases, how far we still have to go. 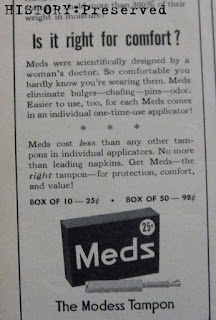 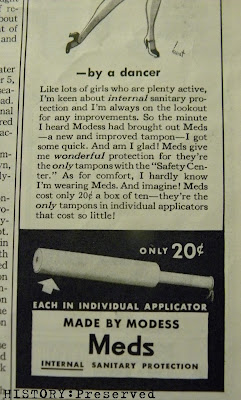 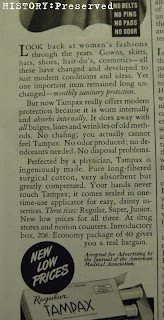 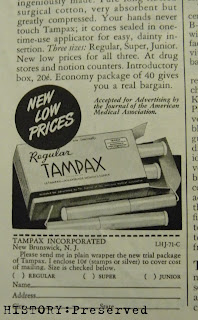 Update 12/29/17: My dear, sweet husband went on a crusade for me and talked to numerous people to figure out the problem with the septic tank. He even talked to the man who I conversed with, and the man did apologize saying he hadn't meant to offend me. I appreciate this gesture, and I especially appreciate the men who are working on finding a solution to this problem that works for our family.
20th century historical ramblings techonology underpinnings