- January 15, 2018
Yesterday I ran a trial of a full day's menus from an original wartime menu. I got the menu from Westinghouse's Health for Victory Meal Planning Guide, January 1943 issue. One thing I noticed is that this menu is a lot of food and it's not for people on a diet! I'm currently doing Weight Watchers and the breakfast alone used up more than half my daily allowance. Yikes! Going forward, I'm going to have to do some adjusting with fats/sugars or eat much smaller portions.

Here's the menu I used for Sunday: 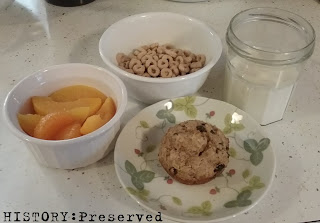 Notes: This was, obviously, a very easy menu. It was pretty straightforward. Except for one thing. The Raisin Bran Muffins recipe had an odd baking temperature - 400º F with a 30 minute baking time! This is unheard of for muffins. My husband thought it might mean to bake the muffins from a cold start - preheating the oven as soon as you put the muffins in. This is the only thing that makes sense to me, and it's a technique I saw in a different wartime cookbook. I baked them at 400º for 13 minutes and they turned out perfect. They were moist and delicious! I subbed in bran flake cereal dredges for the wheat bran which imparted a nice malty/nutty flavor. I also used Zante currants (mini raisins) for the raisins as my kids aren't a big fan of the big raisins in their muffins. Zante currants are my most favorite go-to raisins for recipes because they're so cute and tiny! 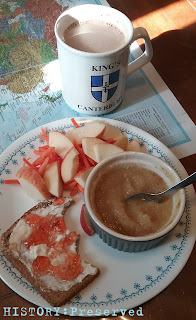 Notes: I was still a bit full from breakfast, which was a happy surprise, so I had smaller portions of everything and only a few sips of cocoa. There was no way my family was going to eat a carrot salad with raisins and mayo, so I just piled on some matchstick carrots we had left over from a meal last week and added some cut-up apples. It was a nice, refreshing lunch! 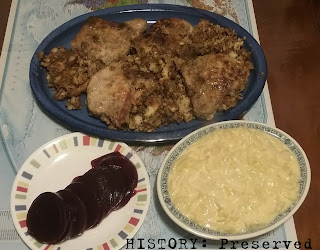 Notes: Whew. This dinner was a lot of work! I had to kick everyone out of the kitchen so I could think straight with so many things going on. Having the salad and Peach Crumble made in advance would have been helpful...

I made the most changes to this menu. I bought pork instead of veal because I couldn't justify the $14.95/lb. price tag (WOW!). I suppose in the 1940s veal was more affordable and less a moral issue than it is today. Anyway, I totally forgot about making the mashed potatoes, and I forgot to buy orange gelatin for the Molded Cranberry Salad, so we had canned cranberry sauce instead. (The canned cranberry sauce "log" came out in 1941, so it's totally appropriate.) Just so you know, I bought the orange gelatin today, because I'm determined to try out the Molded Cranberry Salad!

I didn't serve the bread because we were having the dressing, and it seemed redundant. Speaking of the dressing - it called for 1 tablespoon of salt! That's just ridiculous! The dressing was so overly salty, but when I mixed it with pieces of pork and smothered it in the Creamed Onions, it all balanced itself out quite nicely. I was super surprised how tasty the Creamed Onions were. It's something I would never choose or think to make, so I'm glad today's menu stretched me a little!


Overall, I'm happy with how the day turned out. My family kind of just went with the flow. They're used to my ration recipe experiments, and they always meet new recipes with intrigued skepticism, if there's such a thing. haha!

Keep an eye out for my next trial run!

If you haven't downloaded the 1st week's worth of menus with the recipes I used for this trial, you can do that here!