- January 16, 2018
Today, I tried a few more of the ration menu recipes. I was working off Monday's recipes even though it's Tuesday, because we were still eating leftovers from Sunday's menu recipe trial. It's looking like every 2-3 days is what will naturally flow for us and these menus. It just makes a lot of food, and even with using some of it for my husband's lunch, there's still enough for us to eat later! (I can't say that for the desserts, though. Those have disappeared pretty quickly!)
Breakfast was just whatever, but for lunch I had leftover Cream Cheese sandwich filling with chopped celery and it was nice and refreshing!

Pictured below is today's dinner. Here's what we had: Vegetable Meatloaf, Cole Slaw, Brown Bread + Butter, and I forgot to serve the Molded Cranberry Sauce! (though I did have some for lunch and we had some yesterday. I finally went out and bought the dang orange gelatin I forgot to get so I could make it Sunday!) Dessert was the wowsers American Pudding - much more details on this later. 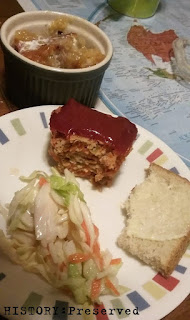 Vegetable Meatloaf: Ground Veal (veal again!) mixed with sour cream, salt & pepper, ground green pepper, onions, and 2 whole CUPS of ground carrots. This amount shocked myself and my son who was suspicious of the meatloaf after that. haha! He loves meatloaf, and takes it very seriously.
I used ground turkey this time in place of the veal. I couldn't even find it ground anyway, and followed the recipe after that. Except I added ketchup. It's where I have to draw the line. Meatloaf must have ketchup or BBQ sauce on the top or we don't eat it at all. lol! (And don't worry, I have a reference for ketchup on top in another WWII cookbook I have.)

Cole Slaw: There were a few versions the cookbook gave me and I used the most unusual one that called for using evaporated milk. The slaw was pretty tasty, though my son was sad it didn't have pineapple in it. (It's our favorite kind.) 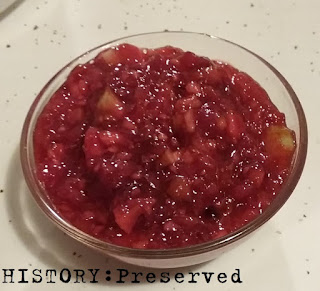 The menu called for Cranberry Relish, but I was going to replace it with the forgotten Molded Cranberry Salad. So, here it is! There is one word for this salad - charming. Okay, maybe two. Amazing! My son and I really love this salad. It's perky and interesting. I could see even adding some raspberries to this, but as it stands, I am in love!

Finally, American Pudding:
For this, you have to think a bit outside the box of the standard and very traditional English boiled pudding. (That's us Americans, eh? lol!) The batter looked so tiny and small and thick, it was hard to believe it was going to make much of anything. The recipe called for currants, so I put in frozen ones  from our currant harvest this summer. I'm so glad I did! They added just the right amount of punch.
The recipe then has you boil water, add honey, butter, and and a bit of salt, and then you pour it over the batter and bake it. 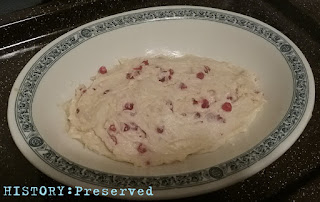 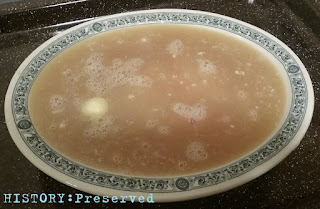 Essentially, you end up with a self-sauced pudding dessert! Serve with a bit of cream and... Oh my!! 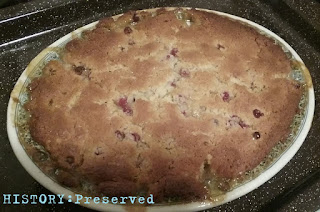 This little dessert was fantastic. It's another wowsers from the '40s for the record book!

Stay tuned for our next trial menu!