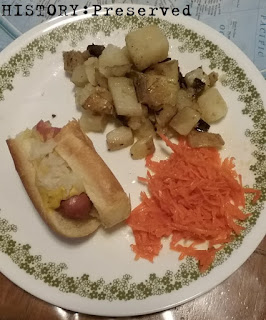 There's nothing fancy about the third menu I tried - Sauerkraut, "Wieners", O'Brien Potatoes, and a Shredded Carrot Salad with homemade French Dressing. Simple, American food. (Does French Dressing count as American? haha!) And it was awesome! This is one of my favorite menus so far. It was easy, and totally delicious. The dessert was a Dutch Pear Cake, which I wasn't able to make, but hope to soon.

The original menu wanted me to make a potato casserole, but I couldn't find the recipe for it in the cookbook, and I don't know what they meant by a casserole, so I found another potato recipe in the cookbook. O'Brien Potatoes consists of cooking cubed potatoes, green peppers, and onions in a skillet with some fat and letting it sit there without much stirring - kind of like hash browns. You season it with salt, pepper, and some parsley, and that's it. It was really good! My family requested it be served again in the future if that says anything.
Both my kids complimented me on a "yummy dinner." Sometimes the ration recipes are a success!
1940s food Project Ration Menus WWII