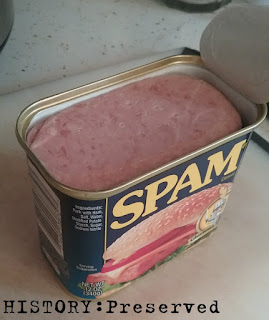 I am so glad I had the ingredients for this wartime menu, because I had no clue what to make for dinner today!

With all the ration recipes I've tried, I have never once tried SPAM. I actually feel pretty silly about that. I've had this can of SPAM for a long time in anticipation of using it for one of my recipes, but always forgot about it. So, when I saw that this menu called for "spiced pork", my interpretation of that was SPAM, though I'm not sure if they were using it this early in the war for when the menu is from (1942).

For a first time trying it, I think this recipe was a good one. But first up, let me show you what today's menu was:

I was really skeptical when I was browning the SPAM to heat it up and maybe cook off some of the fat. It smelled funny - like the tuna fish of the ham world. There wasn't a recipe for this casserole, and we've never eaten Lima beans in large quantities like the title suggests, so I knew I'd need to bulk it out with a few other things for my family to eat it. I sauted the beans with a frozen onion and sweet pepper mix and the last of a bag of frozen mixed veg. It turned out rather nice and cheery-looking! I added that to the SPAM and heated them up together with the addition of salt, pepper, and a dash of garlic powder. I also cooked some rice to add to the mix. After sprinkling on some cheese, it looked pretty promising. 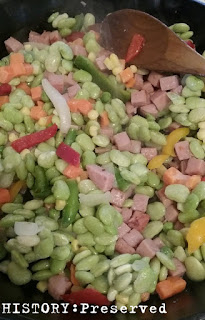 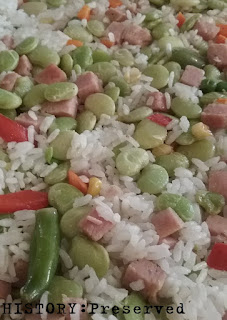 My first bite of this casserole was a complete surprise! It was really good! I think sauteing everything first really helped. This whole meal was nice and satisfying, and the Banana Drop Cookies were a delicious finishing touch. 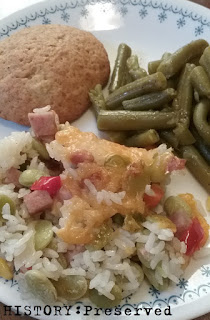 Speaking of the cookies... My poor family had to put up with a whole slew of crazy banana recipes last summer, so there was no way I was going to submit them to baked bananas. So, I looked in my 1942 cookbook Bananas...How to Serve Them and came across these yummy sounding Banana Drop Cookies. They pretty much taste like banana bread in cookie form, which was a little disappointing at first, but then I realized they were much more convenient to eat than banana bread. So, that actually made me happy. haha! 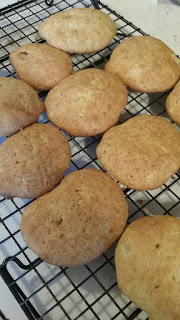 Next week is April, so I'll have the new menus up on April 2nd after the Easter Holiday!
1940s cookbooks food Project Ration Menus Wartime Menu Challenge WWII