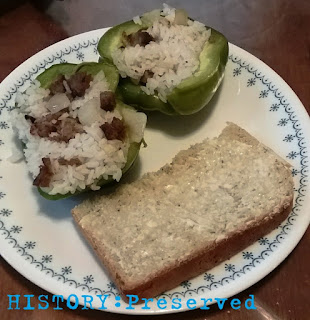 I tried one of the last menus I'll be making from March's set of menus. I made a lunch menu and once again served it for supper. I served it with my son's herb garlic bread to supplement it. It was a simple meal, and a couple children revolted (the baby ate it. ha!), but it was filling and healthy. It was a great way of stretching meat.

I had a bunch of sausage patties no one was eating, so instead of going out and buying bacon, I used the sausage instead. The filling was quite tasty! I added some salt and pepper, but that was it. My husband later added some Asian sauce to some of the leftovers and he said it was really good that way too. haha! I'll be honest. For some reason, I don't do well with stuffed vegetables. It takes a lot for me to choke them down. I don't know if it's the texture or what, but it's really sad. I feel like we miss out on a lot of yummy stuffed veg because of that! 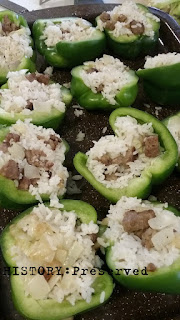 The dessert was a type I'd never made before - a meringue! I followed the recipe, but plums are totally not in season right now, so I used strawberries. Not exactly the season, but close enough. And they were on sale.
The meringue recipe has vinegar in it, which I thought was interesting... 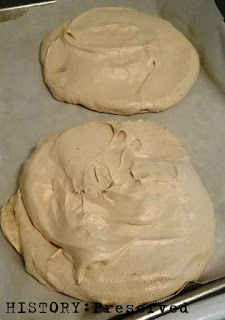 As I made this recipe, I was reminded of the Great British Bake Off when they made, was it a Pavlova? It was a meringue filled with cream and fruit and looked really good. The recipe didn't call for whipped cream, but I had some lurking in the fridge, so I couldn't resist! 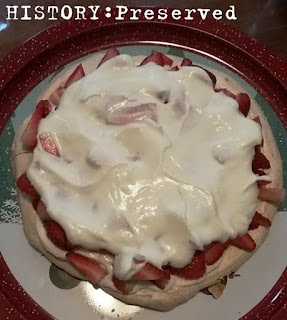 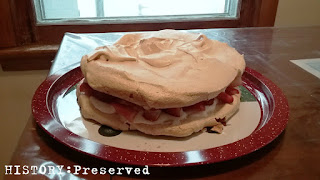 Strawberry Kiss Pie! It's more like a giant meringue sandwich with strawberries and cream inside. 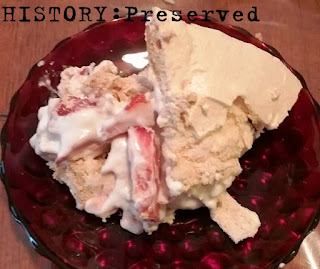 The meringue was crunchy and chewy, sweet and tangy. The strawberries added just the right texture and note with the cream. This was really good! My whole family loved it, even though their initial reaction was of skepticism. My son claimed the last piece and ate it with relish today. I'd say that was a successful wartime recipe! It would be fun to try other kinds of fruit with this too. Like peaches! Or raspberries. Mmmm...
1940s food Project Ration Menus recipes Wartime Menu Challenge WWII