BREAKFAST
For breakfast this was the original menu:

I kept it mostly the same with only a few changes due to what we had on hand:

Yum! It was a nice breakfast, especially since it wasn't just cold cereal. To make the fluffy omelet, I didn't follow a recipe. I just added some milk to the scrambled eggs which makes it fluffy as it slowly cooks. And I sprinkled a bit of cheese on top.

The lunch menu was quite lovely! We actually had it for a light supper.

I stuck to this menu, and used a recipe for the soup from one of my wartime cookbooks. It used a mixture of milk and evaporated milk. I used up some light cream I had sitting in the fridge in the soup too. It was completely delicious! If you haven't had homemade cream of mushroom soup, you really don't know what you're missing! The canned kind can't even touch this stuff. 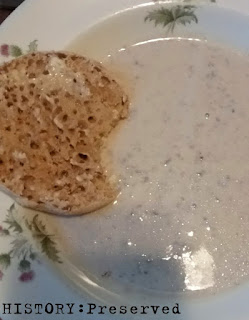 I puzzled a bit over the "toasted muffin" bit and how you could possibly toast a muffin without it being all weird, but it suddenly dawned on me awhile later. Of course! English muffins! Yeah, American muffins wouldn't work so well. haha!

Now we come to the Berry Patch Salad. Bizarre of bizarre gelatin salads... This is a mixture of orange gelatin, berries (called for Loganberries which is somewhere between a blackberry and raspberry, so I opted for the latter two because the store doesn't sell loganberries!), mayonnaise (of course!), and watercress.

I followed the recipe and this is how it came out. I'll fully admit I thought it looked like a revolting kind of cheese or something. Ugh. It IS pretty ugly! 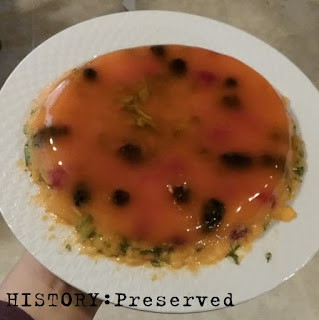 But, heck! It was actually pretty dang good! The watercress was a bit odd in there, but it was crunchy and it worked. Let's just say this is a healthy-tasting geltain salad, but only because you're munching on lettucey type things and berries. I have to note as well, that this was my first time trying watercress. I was lucky to even find it at the Asian grocery. No one sells that stuff anywhere else. Anyway, I'm so glad this salad was a happy surprise. Even my family ate it!

This dinner menu made use of a previous meal using corned beef. It was essential I cooked the corned beef only until it was done and still firm. Otherwise this meal wouldn't have been possible.

I opted to not make the dessert since we were still recovering from the Cherry Upside-Down Cake. Yum....

I dredged the slices of cold corned beef in an egg and milk wash and then breaded them before frying on both sides. Pretty straight forward. 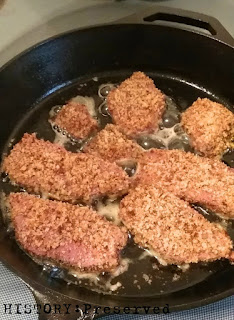 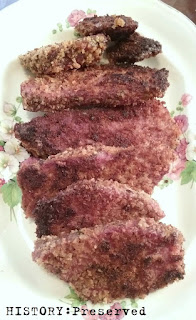 They turned out quite nice!

And here's the whole meal! Yummy!
I'll be honest though. I don't eat baked potatoes very often. Weirdly, ever since I was a kid, baked potatoes have given me headaches. Maybe it's all the starch? So, after I took this photo I doused the potato in some whole milk yogurt and ranch dressing before I could eat it. Not very wartime-spirit, I know. But I ate the potato skin, people. Ok?! haha! 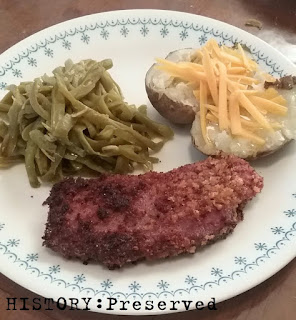 Talk about a crazy time putting a meal together! I'll get to that in a second.

Yeah. Not really successful sticking to this one, but I should totally get an A for effort at substitutions! I wasn't able to run out to the store to get the sweet potatoes (my family wouldn't eat them anyway), and I wasn't feeling up to making custards, especially since I didn't have any berries. And cooked spinach is a big NO in this house. So, here's what the menu ended up looking like:

The cole slaw was totally modern, but hey, I was using leftover cole slaw from another meal and it was made from scratch! For the Pumpkin Custard, I was using up some home grown pumpkin I'd thawed out last week, and I figured it killed two birds with one stone for the sweet potatoes and custard. WIN! 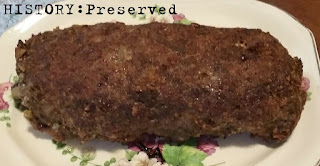 And I have to say, that this Pork Roll was killer! I'm not usually a fan of Waldorf Salad, probably because it's raw and crunchy, but cooked inside the pork roll, it was awesome! This recipe is a keeper! 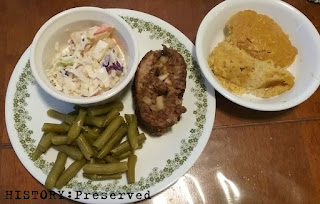 Oh, and I accidentally made an extra vintage dessert during this whole dinner-making-with-substitutions-fiasco which I'll have to post about later. It involves cranberry sauce, Dream Whip, and Korean marshmallows... You don't want to miss it!