- April 25, 2018
Wow, I'm behind! I've got three meals to post about. It's been a busy few weeks. I can hardly believe April is almost over! Which means the May menus will be out soon. Yay!

I think veal tastes really nice, but it's really expensive. I had chicken tenders on hand, so that's what I used for the cutlets. The chicken turned out well. I was pretty pleased about it!

Because of a disgusting gelatin salad in the past, I altered the recipe for the Grapefruit and Carrot Salad. I omitted the vinegar and salt, and the salad turned out quite yummy! The base is lemon gelatin. The grapefruit and carrot together worked better than I thought. The salad disappeared over the next few days, so that was a good sign. It also confirmed that there is no place for vinegar and salt in a gelatin salad. Sorry 1940s!

Green beans replaced buttered spinach. Any cooked spinach is a big NO GO for our family. :-) I wasn't in the mood to face all the work of creamed potatoes, so mashed potatoes was a great replacement.

The economy ice cream was pretty involved, so I didn't end up making it. I'd like to in the future though. I've found quite a few interesting wartime ice cream recipes. Maybe this summer! 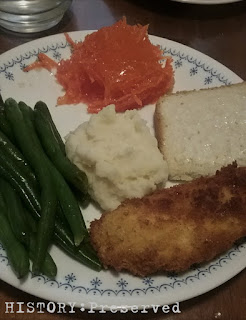