- April 09, 2018
It's already April 9th, and I'm just now trying the first of April's menus! I decided rather last minute to make one for last night's dinner. That's not really a good thing, because I really need to plan ahead for meals. Luckily, I had everything on hand for one of the menus: Creamed Cooked Meat on Soya Cornbread. Here's the official menu:

As you can see, I did really well with this menu! I didn't have time to make dessert. Besides, my rhubarb just started sprouting up in the garden last week, so it's nowhere near harvesting, and I don't think my family would've eaten it... unless it was over vanilla ice cream or something. 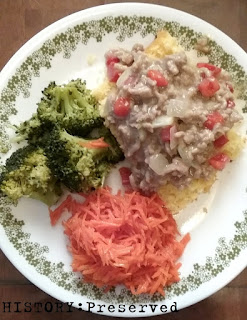 The final verdict: My husband thought the meal was "okay", my son ate it without too much complaint, and my daughter ate everything and liked it! Wartime Homefront Victory achieved! She loves the grated carrot salad with the homemade French Dressing and told me so. After some trepidation and refusal, she tried the meat and asked for seconds and thirds, though she discreetly picked out the peppers and onions. haha!

As for my opinion, I thought the whole meal was fantastic! I never would've thought of serving the creamed meat over cornbread. It reminded me a little of tamale pie. The "creamed" part of the meat is actually a gravy and is really yummy. I made a chicken gravy from a mix that I have on hand. You couldn't taste the soy flour in the cornbread, which was good. (You may or may not recall the Soya Fudge fiasco of 2014...) I really love cornbread, so I was worried about the soy in there. All was good though!

And the fact that I ate that much veg in one sitting is a personal triumph. I've noticed that almost all the times that I can stomach eating so much veg is with ration recipes. So good on you, 1940s! It's very sad that I gag on vegetables after eating so much of them, so I'm enjoying trying these new textures and flavors!