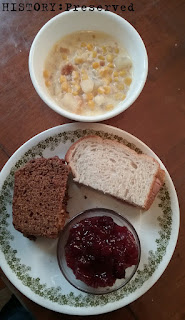 I finally got around to trying the first day of this month's menus! I had to take it in a few steps because it involved making some bread first before I could make the sandwiches themselves. So, here's the menu:

Besides forgetting to serve the celery, I did really well with this menu! I felt like something was missing, and the celery would have been the ticket. Oh well. 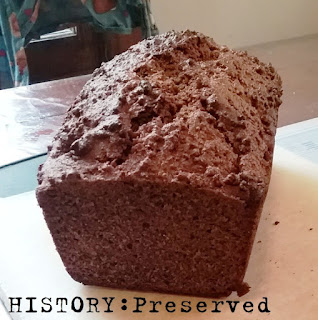 Once again, I served this lunchtime menu for dinner. I first made the graham bread. I was surprised that it was a quick bread! One thing I've learned from wartime cooking is that quick bread makes awesome sandwiches, plus, no kneading required! I've never used graham flour, but the texture is a little different from whole wheat flour; it's coarser which gives that distinct mouth-feel.

Once that was in the oven, I made the dried fruit sandwich filling by stewing some golden raisins and prunes I had on hand. I used pecans for the nuts required in the recipe. I thought I had some cranberries left over from the holidays, but after searching through my freezer and braving some freezer burn on my fingers, I just couldn't find it. So, I gave in and went to the store for good ol' fashioned Ocean Spray in a can. Yum! Canned cranberry sauce is very authentic, just so you know. :-) Click the link to read a previous post I wrote about it! 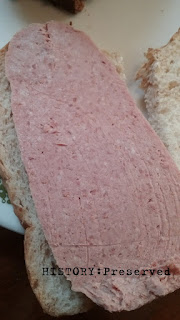 For the liver spread, I just used the braunschweiger/liverwurst lurking, unopened, in the back of my cheese drawer. Yeah, no one wanted to go hunt that down. Ha! 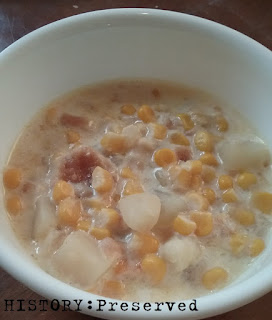 I saved talking about the corn chowder for last. This was really interesting! The recipe had you cook the onions and potatoes in the fat (should have used bacon grease instead of butter for the bacony flavor!), until they were soft and then you're supposed to add the corn and scalded milk. I don't remember doing that with my modern recipe, but I thought it was a cool technique, that actually makes the soup come together faster. Instead of using thickener like flour, it has you put in saltine crackers. The recipe says to "halve them", but going which direction - thin wise or just break them in half? This was too confusing, so I just crumbled them in. I thought they'd kind of turn to mush in the soup, but surprisingly, they didn't! The bigger chunks of cracker turned into these little bits of dumpling-eque things that were quite tasty! And the soup did thicken too.

As for the sandwiches:
Liver Spread on Wheat - The liverwurst tasted pretty much like I knew it would. I didn't fancy it up with mayo or anything. Just straight liverwurst and bread. My kids wouldn't even try it. Oh well. I did manage to finish my half-sandwich. It wasn't my most favorite, but if it showed up in my lunchbox and I had nothing else, I'd eat it.

(So, funny story about liverwurst. In 4th grade there was this kid, Aaron, who frequently brought liverwurst & ketchup sandwiches for lunch. We didn't have a lunch room, so we ate at our desks. No one wanted to sit with this guy when he brought his weird sandwich. I didn't mind it, so whenever he brought the dreaded L&K sandwich, we were lunch seat buddies. Believe me, I made a few faces myself, mostly about the ketchup part, but he was a nice kid to talk to! It was worth it. haha!
I digress... 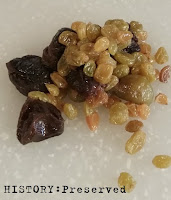 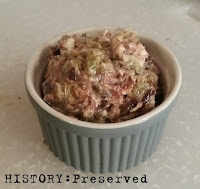 Dried Fruit Sandwich Spread on Graham Bread - The stewed dried fruit and nuts are mixed with  mayonnaise (surprise!) to keep it all together. It was quite sweet, but paired with the molasses-heavy bread, something mellowed it out at the end. It was interesting! The bread was quite coarse, which isn't unexpected because of the coarser graham flour. None of my family really liked the graham bread, which is a shame. It is on the dry side, but it's still quite nice toasted with a scrape of butter.

The cranberry sauce was a nice kind of dessert. I'm sad I couldn't make it from scratch, but I'll have to remember the recipe for Wartime Cranberry Salad for the holidays.

Overall, a nice little meal. I felt very satisfied. Now, on to the next! I'm already prepping for the next lunchbox meal!