The year of 1999 was an exciting one for Newsies and newsboy strike fans. It was the 100th anniversary! The fans united and started planning a big get together in New York City to celebrate. They made a t-shirt (I bought one!) and there were even rumors of inviting one of the stars from the movie, Max Casella. It was a big deal, and I was dying to go. But Indiana was just a bit too far away, and we could afford to drive all the way out there just to go to a history geek/movie fan party.

So, I missed it, and it was a huge bummer. I didn't know at the time that I would be going to New York the following year, just missing the 100th anniversary. But, what I did get to experience was something much deeper than a one-time party - I got to know the real newsies through newspaper articles, I met one of the cast from Newsies (Dee Caspary who played Snitch), and I had ample opportunities wandering the same streets they did, visiting the statue of Horace Greeley that's a big part of a few dance numbers in the movie like "Seize the Day" and my favorite "And The World Will Know", and visiting the amazing Lower East Side Tenement Museum to get a feel for how some of them really lived. It was an incredible time in my life, and I am so grateful for that experience.

That's one reason why celebrating the 120th anniversary of this strike was so important to myself. It's kind of making it up to my younger self and honoring all the hard work I put in for something I was so passionate about.

For the articles from Saturday, 29 July 1899, the strike is really winding down now. There's new leadership (see ya, Kid Blink!), and there are hints that the newsboys are weakening, or maybe the papers just aren't interested in reporting about it anymore. What do you think?


**Please respect all my hard work and investment. Please do not copy, store, or share these photos elsewhere without permission and proper linking back to this blog as well as correctly referencing where all the articles come from. Without the references, they pretty much become useless.
Thank you! 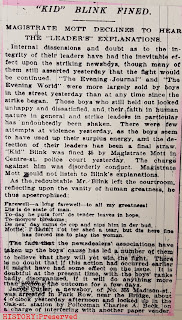