- July 11, 2019
The story of the newsboys strike of 1899 is just a tiny event in the course of a tumultuous time in the labor history of America. Disney brought the story to light with the movie Newsies in 1992. Many American kids who grew up in the '90s have fond memories of the movie and could probably sing a few bars from at least one of the songs. There is a smaller group of more obsessed fans who watched the movie until they knew every word, every lyric, and possibly every dance... And most recently, a new generation of fans was created when Newsies hit Broadway in 2012. It always brings a smile to my face when I hear modern-day teens singing Newsies songs.

I can now fully admit that I was one of those crazy fans from the 90s that obsessed about the movie. But, you all know how much of a history nerd I am, right? I don't obsess about things in the same way. So when I was a nanny in NYC (Long Island to be exact), what do you think I did with my free Saturdays? Catch a Broadway musical? Nope. Go to the Met? Nope. Sight see? Not much.

I hung out at the New York Public Library and did RESEARCH. On newsies.

The newsboy strike of 1899 to be more precise. I mean, when in New York, you do research right??!? That's what every one does... Right? hahaha!

I spent a very small fortune on printing copies of newspaper articles and reports. Since then, I've had this research for ages, just gathering dust or sitting in a box. And it's been bugging me. With all these new Newsies fans, surely they must be curious about the real, true events the musical was based on. (At least I hope so!) And I'm just sitting on all this research, unshared, unloved. Until now!

This year, we can celebrate the 120th anniversary of this incredible event that inspired the people of New York, and even other newsboys across the country, to stand up for their rights and for better pay. What is it about this story that's inspired so many in the past and in the present? Well, I'm going to share all of that with you right here.

I just have to pause a minute while my inner fan girl squeals... Squeeeeeeeeeeeeeeeee!!! 😁

For the entire length of the strike (July 20th - August 2nd), I'm going to be sharing all the original articles and resources that I dug up during my countless hours of research hunched over a microfilm machine. (And I just might share a few embarrassing stories from my fan days too, just to spice things up... oh boy.) That time was totally worth it, and I hope you enjoy all this cool stuff!

So check back here July 20th and join me in this celebration of an incredible event where children helped change their corner of the world in their own special way. 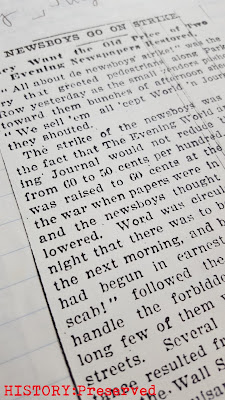