Showing posts from August, 2019
Show all

The Diary of Mrs. X - Installment 6

- August 25, 2019
Now that things are settling here at home with the approach of the end of summer and the start of our homeschooling year (I can't wait for autumn!!), I thought it would be a good time to put up another Mrs. X installment. This is the first time she makes mention of her son who is serving in the military overseas, though she never mentions what branch of the military. Friday, March 16, 1945 Cold worse. This afternoon I met with part of my Youth Council Planning Committee at school. Then finished my Red Cross district. Got no money! Everyone claims to have given already. C. came home early to dine with Cheryl while I took his car & took Bev & Rodney to Ann H’s “party”. 18 boys & girls paid their own way to the Roller Bowl. I took 10 in our car! Was I mad! Mrs. H took 8 in her coupe! They had a wonderful time & she let them skate to the end. When we got back to the house at 11:45 some of the parents were waiting. They served ice cream & cake & I to
Post a Comment
Read more 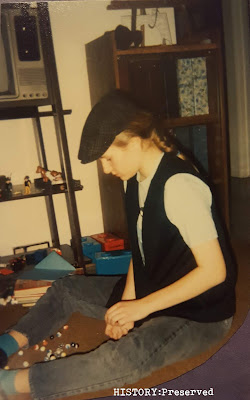 Me Aged 15 (Check out that old TV!) We've made it to the end of the Newsboys' Strike 120th Anniversary! I hope you've enjoyed getting to know a bit more about the true story behind the newsboys' strike. While we can't rely 100% on the newspapers' reports on the matter, it does help to cross-check them to confirm facts. It's amazing to see how widely the strike spread, not just in New York City and its surrounding burroughs, but throughout the country as well - inspiring other kids to stand up for their rights and hoping to make a change. There's a lot we can learn from them. And I think it's good to know that while they didn't "win" per se, they seemed to have arrived at a satisfactory compromise which is good to know. Besides the awesome picture of me above playing marbles in my "newsies" outfit (haha!), I've got a fun little bonus in honor of today's finale. I found some old  Newsies  fanfiction of min
Post a Comment
Read more

Delivering Newspapers, New York City 1899 Photographed May 1, 1899. American Mutoscope and Biograph Company Camera: G.W. "Billy" Bitzer, Arthur Marvin credit No doubt, you're here to discover whether Disney told us the truth in the movie - did the newsies win their strike? Did they band together with the messenger boys and the bootblacks and all the other child laborers in New York City and make Pulitzer and Hearst back down? Well, I guess it depends on how you measure success. Did they achieve their original goal of making the big guys reduce the price of their papers to pre-war prices? Let's take a look at the final two articles for Wednesday, August 2, 1899 to find out. That's right. Just two. Articles about the strike at this point were hard to find! NEW YORK SUN New York Sun 2 August 1899 NEW YORK TRIBUNE New York Tribune 2 August 1899 Well, here is the final word in this New York Tribune article: "The reason
Post a Comment
Read more 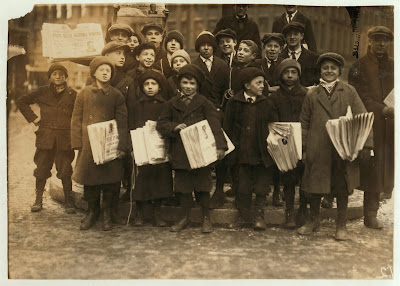 Group of newsies selling in front of South Street Station. 4 of them said they were 11 years old. Saw no badges in evidence. 1917 Lewis Hine - photographer wikimediacommons I love this photograph of these newsboys. They look cold and yet so many of them are still smiling for the photographer, Lewis Hine. You might have noticed that most of my images have come from Wikimedia Commons. Wikimedia Commons contains a wealth of photographs in the public domain that tell so many countless stories. If you go to commons.wikimedia.org and search for "newsboys" you will find dozens upon dozens of amazing photographs! I've had a lot of fun browsing through some of them and at the same time felt very somber seeing the conditions that those children worked in. Americans owe a lot to the tireless work of Mr. Hine and the willing young subjects of his camera. Today's articles for Tuesday, August 1, 1899 are very few. It's not looking good for the newsboys in NYC if t
Post a Comment
Read more
More posts